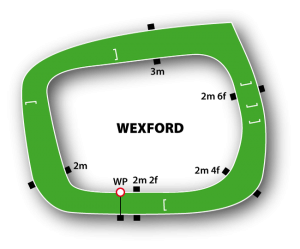 Wexford is an undulating rectangular track of one mile four furlongs furlongs and in 2015 the track was overhauled and now runs left-handed rather than right-handed. It remains very much a sharp track with tight turns which still favours the handy type, particularly the hurdles course which is on the inside of the chase course. There are six fences to a circuit on the chase course with three in the home straight two on the far side and one on the bend as you enter the back straight. There are six hurdles situated alongside the fences and although easy enough obstacles are often tricky on the downhill run off the back straight.
Wexford has dropped it’s flat meetings and it is thought that the change from a right-handed to a left-handed course has made this a much better venue for jumps racing. The winning post is to the right of the grandstand and what used to be a tight venue has now been extended and it is a much stiffer track. You climb into the back straight and then descend across to the bottom of the track before you reach the home straight, climb sharply off the home turn and then it is uphill all the way from there to the winning post. With the change in direction it has been noted that the course could now be considered a stayers track but only time will tell.
The rate of incompletions is quite low at 8% and the standard times are still on the slow side especially the hurdles course but this may change as the new course settles in.