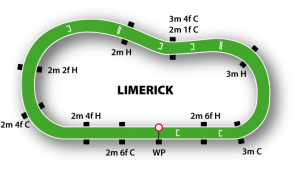 The new track at Limerick opened in late 2001 and has the distinction of being the first purpose built racecourse in Ireland for nearly fifty years. It is a galloping, right-handed oval track with a circuit of over a mile and three furlongs. There is a fairly sharp turn after the winning post then a stiff climb in the back straight before a downhill run to the three-furlong home straight with a slight rise in the final two furlongs.
There are seven fences to a circuit of the chase course five of them in quick succession in the back straight which is situated on the outside of the hurdles track and there is a run-in of around a furlong.
There are six hurdles to a circuit with four being in the back straight and two in the home straight. Although described as undulating it’s pretty level to the winning post and is a course that suits a good jumping front runner.

The standard finishing times at Limerick are about as average as they can be on the hurdles and NHF circuits but are they are fast for the chase course and with the rate of incompletions being just above average at 11% indicates that the fences are relatively forgiving. Form taken from tracks such as Thurles Downpatrick and Clonmel would give you a good indication of how your runner will fare here even though the proximity of Thurles and Clonmel to Limerick can exaggerate those particular statistics.