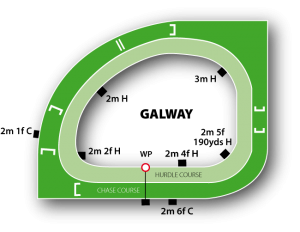 Galway is a right-handed, undulating, sharp track with a circuit of just over one mile two furlongs and a sharp drop two furlongs out before an uphill finish.The chase course has seven fences to a circuit, with the final two fences very close together followed by a run-in of well over two furlongs. The hurdle course is inside the chase course and makes it quite a tight track.
This is a track that the phrase ‘Horses for Courses’ phrase was made for and is very much a specialist track that suits front running or handy types. It is thought to be a very hard track to ride and a jockey that rides the course well is a big advantage as you often see riders asking for effort coming down that hill and they rarely finish out their races as the final uphill finish is one of the steepest on record.
Horses that have done well at Ballinrobe, Limerick, Fairyhouse and Listowel are worth noting. The standard times here are the fastest on record in Ireland and the fences although easy have an average rate of incompletions at around 10%, most probabaly due to the speed they are taken at with the second last fence after the downhill run being the worst.