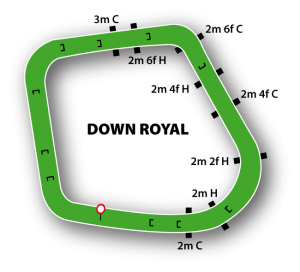 Down Royal is a well drained right-handed steep undulating track with a circuit of one mile and seven furlongs (the largest circumference track in Ireland) the course is deemed to be a galloping track favouring no particular type of runner but with its undulations and long straights stamina is essential. Previous course experience is a bonus but also horses that have run well at Fairyhouse and to a lesser degree Thurles and Punchestown should be noted. On the chase course there are ten fences to a circuit with four fences in the final four furlongs and a run-in of less than a furlong in chases over two miles no fence is jumped more than once. Hurdle races over two miles start on the chase course after the last fence with the first hurdle jumped only once with a longer run-in of over one and a half furlongs.
The fences are said to be fair but the rate of incompletions is the highest in Ireland which is probably linked to the fact that the horses are always travelling at a decent clip and mistakes are more frequent. The standard times are however consistantly just above average on all tracks. With regard to the tracks the chase course is wider than most and it is not uncommon for jockeys to run wide looking for better ground. The previous statement may well explain why the times are not that fast as the extra distance travelled compensates for the faster general pace.