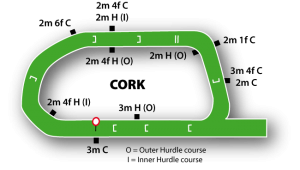 A right-handed, flat track with a chase circuit of one mile four furlongs it has two hurdle circuits. The inner one around runs at just over one mile two furlongs. The track is a level track galloping in nature but a very fair track that favours no particular style of running however horses that stay up with the pace have been known to do well here. There are eight fences to a circuit of the chase course with three in the four furlong home straight and a decent run-in of around one furlong. The fences are thought to be testing and with the rate of incompletions being at just over 12% this tends to back up the theory. The times at Cork are just a little faster than average on the chase and hurdle tracks but the NH track is faster than most which supports the good drainage theory and the better ground that is usually on offer. The previous point is only a theory as although over the years the adjoining river has been known to flood the track, remarkably the going never really gets boggy and even when the going is decribed as heavy the times indicate that the track rarely runs slow races..