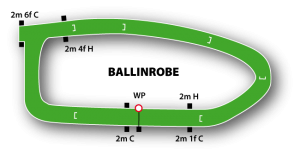 Ballinrobe is a right handed track about 1 mile 1 furlong in circumference the hurdles course is on the inside circuit with the chase course on the outer loop. The course is an oval with two bends and two long straights the back straight is uphill with the last two and a half furlongs to the finish being downhill with a run in of approximately one furlong.
There are six fences and four hurdles to there respective circuits and the outer jumps track has far more undulations than the inner hurdles course and can prove a test of stamina for the chasers.
The course is described as a sharp track with easy enough obstacles the percentage of fallers and unseats at the track runs at 8% which indicates the fences to be on the easy side.  Horses that run well at Clonmel, Downpatrick, Galway, Limerick, Thurles and Tipperary tend to run well here but I have discounted Galway due to its proximity to the track and Tipperary as it is the only left handed track in the list.
This leaves just Clonmel, Downpatrick, Limerick and Thurles which as with Ballinrobe all have similar traits as all are right handed sharp or tight tracks all of them are between 1 mile 1 furlong and 1 mile 3 furlongs in circumference and all are to a certain degree undulating. There average course times are all on the slow side and they make for an interesting grouping of tracks.
With regard to the average course times Ballinrobe runs on the slow side on the NHF track and the chase course but actually rates as one of the slowest tracks of all on the hurdles course.

The Racing at Ballinrobe only takes place between April and September and has approximately ten meetings a year but is usually well supported.